My Response to "The Gathering of the Rainbow Tribe"

The Gathering of the Rainbow Tribe: New Age delusions and rude Awakenings

I am writing to say that overall, your article was very informative. Of all those I have read on this "New Age" thing, I think it says a lot, because I have often wondered about the separation into respective corners or the exclusivity of many of them. But I would like to stretch this topic a bit further. Being trained in the Spiritual Traditional System of an African Nation, I find it interesting that the idea you put forth about inclusion does not include African Spirituality.

Too often there is little mentioned and maybe that is because there is little known. But African traditional spirituality in an overall perspective along with the African people includes many of the other belief systems. Being strongly nature based and keenly aware of expression of Divine Life in all things, animate and inanimate. Additionally, they also have cultures with great mastery of fire, water, air and the earth energies.


Yemaja (Lemanjá, Yemalla) is a mother goddess, originally of the Yoruba religion, who has become prominent in many Afro-American religions.
In (Cuban) Santeria, she is seen as the mother of all living things as well as the owner of all waters.
Her number is 7 (a tie into the 7 seas), her colors are blue and white (representing water).
She rules the sea, the Moon, dreams, deep secrets, ancient wisdom, ocean secrets, the collective unconscious, and the surface of the ocean, seas, and lakes.
In Africa she is known as Mama Watta, Mother of Waters.http://santiagoribeiro.ning.com/photo/yemaya-lemanja-yemalla-the?context=popular

Maybe in some instances, people use Egypt as the so-called genesis of African Spirituality, or maybe it's just plain ignorance, but there are so many people who do not even see Egypt as a part of Africa nor do they relate to the traditions. There are some spiritual systems that may trace their origins back to Egypt but even in that vain it limits the impact and breath of the indigenous African Spiritual Traditions.
In mentioning the so-called races of humanity, and then limit the Blacks to emotional water energy sounds a bit racist to me. Perhaps, that was not the intent and perhaps I am a bit sensitive.. but if you do not consider or include the other aspects of African traditional cultures, your are in a sense misleading those who read this who may not have another reference.


Oshun, the Yoruba diety of feminity and beauty. She leads the fearful Iyami, the feminine life force that can be either destructive or creative. Yoruba kings cannot
rule without Iyami. The Yoruba Culture, What you want to know........

I would suggest to you that there may be a predominance according to the lessons learned and capabilities acquired by the perspective so-called races, but I would further it by saying that even in this the predominence of one aspect of expression may be in one racial memory or cultural make-up but that humanity has shown its ability to manipulate and manage their environment across the entire spectrum of earth, wind, air, water and fire. In fact, gunpowder was first created in China.

Oggún
He is one of the oldest orishas of the yoruba vault. God of minerals and tools. Pattern of the blacksmiths and blacksmith himself. He also dominates the secrets of the forest and knows how to use them in enchantments.

With his physical strength, personifies the warrior and the irascible and strong man. His children are the proper ones to sacrifice animals, because Oggún is the owner of kuanagdó (knife). He dresses himself as mariwó (skirt made of palm tree leaves) and with a ribbon around the head. He holds a machete which he uses to cut the thicket where he walks. His necklaces are green and black, and sometimes purple. http://mysticwicks.com/showthread.php?236108-Og%FAn-Ogg%FAn-God-of-the-Week

I think your attempt to get folks to "all get along" is admirable. I think that the time and research you did to come to your conclusions is commendable. I shy away from your theory that the West is where it can all culminate into one big happy Rainbow family. Not to be curt, but simply because it is the West, and its destructive ways that has attempted to annihilate every member of the human family, including its own primarily European descendants. 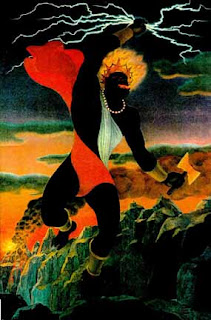 In Yorùbá religion, Sàngó ( also spelled, Sango or Shango, often known as Xangô or Changó in Latin America and the Caribbean, and also known as Jakuta[1]) is perhaps the most popular Orisha; he is a Sky Father, god of thunder and lightning. Sango was a royal ancestor of the Yoruba as he was the third king of the Oyo Kingdom. In the Lukumí (Olokun mi = "my dear one") religion of the Caribbean, Shango is considered the center point of the religion as he represents the Oyo people of West Africa. The Oyo Kingdom was sacked and pillaged as part of a jihad by the Islamic Sokoto Caliphate. All the major initiation ceremonies (as performed in Cuba, Puerto Rico and Venezuela for the last few hundred years) are based on the traditional Shango ceremony of Ancient Oyo. This ceremony survived the Middle Passage and is considered to be the most complete to have arrived on Western shores. This variation of the Yoruba initiation ceremony became the basis of all Orisha initiations in the West. http://dojos-godfire.blogspot.com/2009/12/shango-god-of-lightning-thunder.html

A prophet with a keen sense of this cognitive dissonance and its destructive ways may want to bring all people together under one banner, "Rainbow Coalition", if you will, but I must say in reality, racism has not at all diminished over the past 40 years but has escalated, taken on many forms, and in some instances has destroyed communities, nations and in its trek the planet. We must not be naive in this to think that folks can come together here in the West, as it were, without truth, knowledge, sincerity, and cognition of what the real problems are. Being inclusive means to include all in a representative way. Here I agree with you, that it is not seen in the New Age Movement, "Love & Light" scenario because it is not inclusive, at all, and in fact, has taken the Blonde Hair, Blue eyed Arian image of Jesus, and placed it in a superior position over all.

Oya, the Yoruba goddess of the wind.
She is the female warrior and Shango never goes to war without her. She rules the cemetery. http://www.nairaland.com/nigeria/topic-544320.32.html
The discussion about new age-isms can be quite long and burdensome, but it needs to be discussed and put in its proper perspective. We are all part of Creation. In a garden no two flowers are alike. But they all contribute to its beauty without having to become another flower to do so. The blending of the color frequencies enhance the beauty of the garden, but each flower has its own uniqueness. That being said, I do not believe the Rainbow Family means a blending, but as you put it, an equal acceptance of each other and the contribution that the other brings. 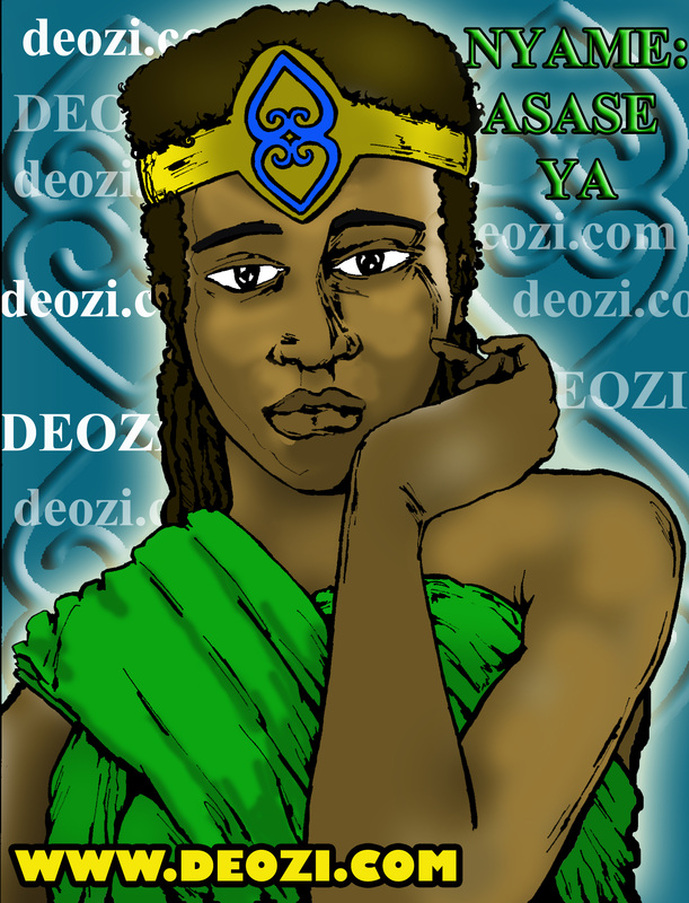 ASASE YAA, whose day of birth (Yaa) falls on the Christian Calendar day of Thursday, is Nyamewaa (goddess) and the personification of the planet many people call Earth. She is also identified as the First Woman in the form of Aberewa. She is wife and consort of Nyame: Anansi Kokuroko, the Creator of All. She is the mother of the famous Kwaku Anansi, whose legend had survived in the Americas despite attrocities against humanity. Her other two sons are Tano and Bea. The sign on top of Her Head is called an Adinkra. Adinkra symbols are from the Akan Peoples and convey messages of wisdom, history, and spirituality. The reason why I did this piece is because I never saw any interpretation of Her artistically. DEOZI! For Artwork Services, Contact deozi@deozi.com!

All things in life that we and see behold are living since life is motion. Even things that we consider to be inanimate objects are actually moving. Movement is life. The greatest expression of this is what we call Nature. And since Nature is the oldest of things - the most mysterious of things, we label it as a Mother. Nothing could be so ancient and not be viewed within the feminine since it is the bringer of life upon this planet. She goes by many names: Mut, Atabey, Asase Ya, Yemoja, Mamiwata, and the list goes on. We respect her in all her glory and magnificence. DEOZI! For Artwork Services Contact: deozi@deozi.com
Thanks for reading this.
Peace & Blessings, Nana Baakan
Posted by Nana Baakan Agyiriwah at 8:00 PM No comments: Links to this post