Thank You, Friend In Need


The other day, when I was thinking about how I would write this, I wondered what would be a good way to convey the message to you and express how I was feeling. I thought about it over and over for quite some time. Then, when I woke up in the morning this song came to me. I have been singing it ever since. It is a beautiful song. So even if you don't get a chance to read the whole blog, please click on the video link.


"I Need You To Survive"

I went to the eviction hearing on Dec. 18, 2012. I was completely overwhelmed by the suffering, pain, frustration and even anger that was displayed in the courtroom. I left there with a migrane headache!

I live in a very small town and I am sure that the Judge knows pretty much everyone. He was a kindly old gentleman and really seemed to be willing to help. It appeared he was more difficult with the Landlords/Realtors. He seems to respond to them as if he felt they should know the law and act accordingly. At times he was impatient with the way they handled their affairs and pointed out to them the several inconsistencies that they presented to him. He demanded that they get their act together and do better in handling their business.

Some of the cases were simply heartbreaking. One woman was left by her husband and she had just lost her job and had 4 children. She also mentioned that she had had two surgeries on her breast and had lumps removed, along with the fact that her son had fallen and broken his hip bone. Tragic! The Judge listened to her, but maintained "If you pay, you stay! If you don't you go!!" Simple as that.

He had probably heard more than enough stories to fill his library with. But he never ridiculed or severely chastised anyone in the court room like you might see Judge Judy or Judge Matthis do on television. I would put him in the over 60 year bracket if I were to give him an age.

Ironically, it seemed the Universe wanted me and my landlord to see the struggles of the others, because we were last to present. There didn't appear to be any order, and we didn't take a number, we all just had a time to show up to court.

With my case, he asked if I wanted to contest the amount, I said no, and it was resolved. A judgment was placed against me for the amount of $1730.00 plus court costs of $122.00. He closed my case by reiterating, "you pay, you stay. you don't, you go." He gave me to December 28, 2012 get it together. At this point, I am almost there, and I am ever hopeful that this will all work out especially with all the help and support I have received from you, others and my family.

He seemed to be sensitive to the time of year, particularly as it was Christmas and intimated that January was coming and while my landlord could start proceedings against me, if I did not "pay within 10 days" the actual proceedings would not really start till after the New Year. It felt like he was giving us all a few more days to pull a rabbit out of our hat.

Ironically, my case seemed to be the easiest and less traumatic compared to the others, and I am wondering if I needed to be there to see just how oppressed we are here in this home of the free, land of the brave. Everyone who was there was renting, not even buying or facing foreclosure, but all were being threatened with eviction. You could see the fear and trepidation in the eyes of the owners who were most likely in debt and were counting on rent to help pay them bills. My landlord even told me that he too was facing foreclosure. I get the impression that mortgage companies are not very tolerant these days. Or at least not with my landlord.

Before I went to court, I had to redirect my energy, it was starting to affect my health and I knew it was my own bottled up fear that was taking its toll on me. In that moment I began to realize that my Landlord's approach to me was the sum total of his own fears and his own needs and his own family pressures.

The so-called economic downturn is hurting the middle guy and the poor guy who holds the middle guy up. Sometimes people forget about the poor guy who holds the middle guy up, by paying rent in their properties so they can have another income to support the one they have. They too, are working with two parents out of the home doing 9-5, latch-key children and other financial issues. They depend on the poor guy who cannot purchase a home but that poor guy, when he can't pay the rent the whole house of cards come tumbling down. I thought about that, and I remembered, sending him healing energy, love and light energy, my help ease his burden and maybe, just maybe, release the blockages in my own life. Fear, hurt, pain, anger and frustration are emotional blockages, they hinder your progress, thus hinder the progress of others around you. We are not living in a vacuum and we are all connected, and while I may not be intimately involved with my landlord, on some levels I am, there is a dependency that he has on me, that makes me a significant other, so to speak.

All in all, I want to thank each and every one of you who were able to help in tangible ways and the rest of you were able to help in the spirit realm. That is what this so called Awakening is about, it is about owning our power and realizing that while we may not be able to pull off the monetary show of hands, we can send love, light, and healing energy to those who cry out for it, and even to those who don't.

I ask, that for those of you who wish you could have helped in a tangible way, if you still wish to do so, feel free. If you are still unable to do so, then by all means, provide a service to another person and send some of that energy my way. Do a random act of kindness however big or small, and tell the Universe that you are committed to service to others in anyway that you can. Sometimes we get so stuck in the material realm we don't realize how much healing we can do with a simple smile on a rainy day. Be kind to each other, embrace each other, love each other and that will be just fine.

Again I thank you all and I wish you the very best for you and for your family and loved ones. 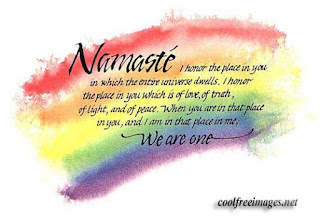 Sincerely,
Nana Baakan
Posted by Nana Baakan Agyiriwah at 3:50 PM No comments: Links to this post