Riley Martin & The Coming Of Tan

From a sharecropper kid to a mothership near Saturn Riley L. Martin was born May 9, 1946, in Mississippi to a family of sharecroppers of African American and Native American descent. This story starts one night when Riley was seven years old... he saw a strange light out by the river, he tried to wake up his brothers and not one of them would wake from their sleep. The next night the lights were brighter and little Riley was more excited and this time he tried to wake up everyone in the house including his parents. Then on the third night when the lights appeared again he didn't attempt to wake his family... he took his trusted dog Brownboy and they went to the river to investigate.


That fateful night; two aliens took little Riley on his first trip to their mothership near Saturn. Riley's second trip was when he was 18. It was on this trip that they placed a strange looking headset on him... then in a matter of seconds download into his brain... 144,000 different symbols...then while Riley slept they downloaded the history of humanity, alien insights, and a whole lot more. Riley made friends with this little alien he calls Tan. O-Qua Tangin Wann.

While driving on Interstate 40
December of 1987. Riley Martin saw a formation of alien spacecrafts in broad day light. With a Polaroid camera... he snapped the remaining 4 photographs of these UFO's in his camera.

Here are Riley Polaroids you can see them all the way to the edge of the image... if photos are ever proof of a real visitation... let them be Polaroids. These alien spacecraft came to Earth to visit Riley Martin. 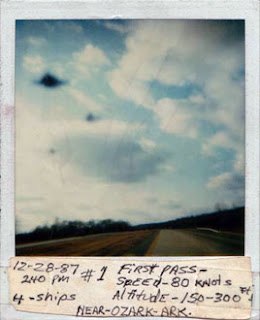 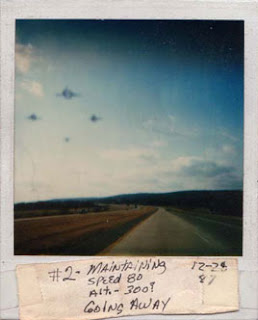 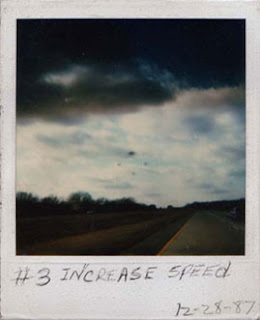 Riley describes seven types of extraterrestrial’s who reside in a mothership near Saturn:
The Biaviians, the aliens who have had the most interaction with Martin
The Targzissians, who are malevolent reptilians
The Stagyians, who have a bony, leathery appearance
The Dorians, who resemble blonde-haired, blue-eyed humans
The Insectillians (aka the Skreed), who are "smart bugs" five feet tall
The Nyptonians, who are "water people" with "underwater bases" on Earth
A seventh race of aliens whose name Martin can't pronounce.

The circular symbol configurations, are not of this Earth.
They are all of Extraterrestrial origins. And to my knowledge, I am the only human being who knows the meanings of them all. During my nine day visit with the Biaviians aboard the great mothership in 1975, the alien Tan fitted me with a kind of virtual reality headset. And through a visual strobe-light, like burst, 144,000 different symbol configurations were downloaded into my mind's Neuro-Syntaxes. The duration of that light burst was approximately twelve seconds. I am now in the process of setting these symbols to visual representation on paper. 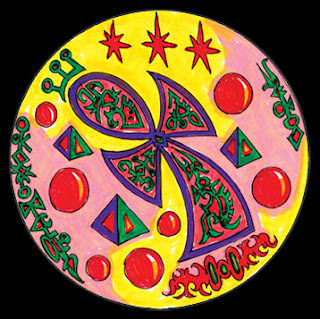 Eventually these symbols will be distributed to 144,000 heads of families and their loved ones, who will comprise the potential wayfarers of the future airlift of travelers from the Earth unto a distant beautiful, un-polluted planet. Let me inform the reader that, one does not have to possess a symbol in order to become a potential wayfarer. However, possession of a symbol assures that the bearer will definitely be considered.


It would not be possible to explain the meanings of all of the symbols in a single book. Nonetheless I will give you in brief, a rudimentary synopsis of a general scope of the symbols' meanings.

The symbols will be granted unto potential wayfarers without regard to race, religion, age or sex. The price of the symbols must be geared to the receiver's material fortunes and ability to purchase it. The symbols are not meant for only the wealthy, but for all decent spirits. 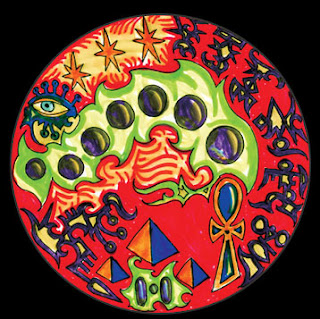 Select a Biaviian Symbol from this book or request that I select one for you from the remaining 144,000. You will receive the original full color Biaviian Symbol along with a personal hand written note from the gift that was transferred to me by Tan on the mother ship in 1975.


In as much as an intelligent high-tech life form can possess positive elements, the symbols are positive. The symbol (s) will automatically tone the positive vibrations of the bearer's home; help to expel negative forces, illness, and misfortune. The symbol attracts prosperity, love and mystic-comprehension. The symbol protects the loved ones of the bearer also.

Although it is possible, the symbols won't usually draw Biaviians to your home in the physical. However, the bearer will probably experience some incidents of kinetic or seemingly paranormal occurrences near them, as the symbol realigns the vibrations, and the aliens scan their homes to access their potential wayfarer status. Do not be alarmed.

Finally, you may consider the original symbol a ticket to the stars, if you so desire to utilize it when the time comes. You will not be compelled to go if you don't want to. The owner of that symbol can reproduce it for their own use only, such as broach, ring, buckle, T-shirt, or framing for each room. However, if the symbol is sold or given to another, the power diminishes. And the original bearer no longer holds the right of wayfarer status. If the symbol is stolen, the thief is in trouble and the owner is not held to blame. If the owner deliberately parts with the symbol, and the receiver uses the force in a negative manner, the original owner is also subject to the elemental reaction of those negative actions. Most people can own as many as seven personal symbols. One can and should be purchased for each family member whenever possible. When all of the symbols are distributed, there can be no more.

Time is of the essence.

I met Riley Martin in 1995 or there abouts. I purchased his book and also received a symbol at that time. The book was riveting and some 16 years later I am still moved and deeply touched by what is written here. I consider myself a Contactee. My contacts have been primarily in out of body experiences and dreams. Looking at my dream history this has been happening to me since early childhood. When I met Riley it seemed to put it together for me and has been growing in intensity ever since.

I have always felt like a stranger on a strange planet. Though I find Earth particularly beautiful, I do not feel a strong tie to it, except to see it as part of Universal Creation, as it were. When I read Riley's book I felt an inner knowing and yearning for this place, Biaveh. I could see the fine details in expanded proportions as if they came to life off the page. Yes, I must admit I do have a vivid imagination, but it is the Divine Creator Self that imagined All That It Is, so my imagination is a portion of that expression.

After quite some time, and many earthly distractions, I was blessed with my own personal apparition. I had been seeing and visiting Tan regularly on a monthly basis in my dreams and out of body experience. I also am very keen of his presence or energies in waking life. But I was quite taken by an apparition from Tan during waking life and explain that in my other post. http://spiritualjourneyings.blogspot.com/2011/11/o-qua-tangin-wans-earthly-visit.html

I have a catalogue of the dreams and OBE's with Tan, Nela, Mr. Smith and Seth, along with many other experiences with others on board the mothership. These experiences started in earnest around Jan., 2010.