However magical the world might be it pales in comparison with what we deserve and what must come. We want the magic of a child; we want to experience without the inhibitions learned; we want that purity that cannot and does not exist in this world; we want the total freedom, and we want it now. The new world has the roots in the old world but it is an entirely different experience. The universe has its rules we as individuals cannot transgress. A change from without is necessary for a change from within.


We can neither disown our inheritance nor abandon our faith in God and his promise of a Golden Age. We make errors, not the universe.

There is a good reason why a big bang did not happen exactly on a dot. When such thing happen, it is easy to loose faith in upcoming transformation of earth but that is equal to loosing faith in God and everything that is good and right. The nature has its own ways of separating right from wrong.

How many of those who expected the fireworks at noon on winter solstice still believe in inevitability of a better future on earth? And how many have eagerly, rejoicing that nothing happened, quickly returned to the old ways??

We must remember that the upcoming change is a total change that requires the total commitment despite all apparent setbacks. Remember also that the night is darkest just before the down. If we abandon our faith now, how true were we? It is all or nothing. How many are truly prepared to commit themselves unreservedly to a better and more beautiful reality on this wonderful planet? How true is our desire for God and heaven on earth? Here is my explanation of why nothing happened exactly on 21.12.2012 and why the new world is still going to be born shortly.

We were blinded by paying too much attention to this single magical date. Would not it actually be ridiculous if the world ended exactly on 21.12.2012 at quarter past eleven as millions from all walks of life gathered to await it? The calculations and messages of many were not wrong but our understanding and our expectations were.

21.12.2012 was the end of Mayan Long Count. This people who were so precise in every respect did not make a mistake – we did in expecting that the end of the world will happen exactly on the day when their calendar ends. This date only indicates that the bridge has been crossed and there is no way back. The end of the world is imminent. It is God’s wil, not human that it be so. The will of god plays out as a natural law that Mayans and many others in ancient past knew well yet we forgot it because we forgot God too. There is no need to blame our ignorance on God or Mayans. When we lost connection with God, we lost all of the knowledge and sense too. Remember it is not the universe or earth that comes to an end but the world as we know it. Earth remains but the world changes. Such periodic changes that alter material and spiritual make-up of all life on earth happen in regular intervals. That is God’s will because it is the law of nature on a grand cosmic scale.

The world did not end immediately, which does not mean it will not do so in a very short space of time. Earth, like every massive body has inertia – a resistance to change. It takes time for a heavy material body like earth to react to a new energetic and spiritual reality that was introduced on 21st of December. It is difficult to tell how much time exactly in absence of empirical evidence. Unlike Maya and other ancient people, we are groping in the dark. We can speculate but cannot have certainty that people of the past had. We know that it is the wobble or precession of earth that triggers such transformation and Mayan calendar was a pure precessional calendar, which means that in some way its end also announces the end of the world but not in the way we expected it to happen on the dot. We were all focused too much on that single date to see the greater picture, and now when winter solstice has come and gone we think it was all false. It was not false. It is us who do not understand, not them being false.

We missed something important – a fact that it is the end of a calendar, end of a cycle, not an actual end. It is an end in abstract terms, not in reality. For example – we know that earth spins full circle in 23 hours and 56 minutes yet because of synodic/sideral difference a day is 24 hours long. Every day the sun rises (or sets) about 4 minutes after the cycle of rotation of earth has spun its 360 degrees. In a strict sense every day a new day arrives 4 minutes later then it should if a day is just one full cycle of earth’s spin. Because earth not only spins on its own axe but also orbits around the sun, this orbital extends a daily cycle for one degree (4 minutes) so that a day is 24 hours. It is similarly with a period of one year. The earth’s true orbital is 360 days yet an actual year last 365.25 days because of tug of war between lunar and solar gravity (primarily). There is an additional 5 days and an additional 1/4 days added to a 360-day year due to the larger cycles of earth. A true calendrical year is exactly 360 days long as all ancient people knew, but an actual year is 365,25 year which is a combination of at least 3 different cycles. Then there is sidereal year and there is a tropical year – the difference between them being the rate of precession, but the precession is not the only long cycle of earth. The cycles are without the number, every successive cycle being longer then the one before. These longer cycles modulate and extend the shorter cycles, so that those cycles are not an exact 360-degree curvature but rather a spiral seen as a slight eccentricity of a perfect circle when seen on a two-dimensional plane. Every orbital, every motion is slightly eccentric or oblate due to this relativistic space/time difference. Even earth or any other cosmic body is not a perfect sphere but slightly oblate. It is this eccentricity, this relativistic difference that is the crux of the matter. I wrote about this extensively on the websites as well as in my book. This gap, this delay, this difference is what makes the world. We exist in that space/time gap. If all was in perfect symmetry then opposite forces will cancel each other out and nothing would exist. It is the asymmetry that separates space from time and creates reality as we know it. It is of utmost importance to understand that nothing in nature is perfect and nothing happen on a dot, then how can earth suddenly jump at the very moment of an exact solstice? Solstice is an indication that the mechanism has been put into motion but we will see the effect of it only when inertia of earth is overcome, which will take some time.

The precession, which pushes earth’s own spin backwards, lasts about 20.500 years, while the so-called perihelion advance pushes earth’s orbit forward and it last just over 400.000 years. It is because of that advance of earth’s orbital that calendrical end of precession does not correspond with an actual end, because regression of rotation and advance of orbital act in opposite directions – one reverses the earth’s spin, the other advances its orbital, and since the orbital is an increment in the daily cycle, it also advances the earth’s own spin. It is for that reason that most sources quote the precessional wobble as a 26.000-year motion but that is a combined motion of those two great cycles; the precession alone is a theoretical 21.600 years (perfect curvature) or an actual 20.500-year period (eccentric curvature). Just as the earth’s orbital motion prolongs earth’s day, so does the orbit’s slow advance over 432.000 years (perfect curvature) prolongs the earth’s precession (very slow backward rotation), so that calendrical end (21.12.2012) does not correspond with an actual end. Everything in nature functions this way, with a slight delay. Nothing happens on a dot. Nothing is perfect.

Mayans were precision freaks. Their calendar indicates the exact end of a cycle, not the end of the world itself, which must occur with a slight delay. How much the end is actually delayed can be only a matter of conjecture in absence of empirical evidence. My guess is that the actual end will occur 14.4 days after winter solstice, i.e. around 4th of January when earth is in its perihelion (closest point to the sun) or alternatively 18 days after solstice, i.e. around 8th of January. If that does not materialise then it can be any time, sooner rather then later. In any case we are not far off from the actual end – i believe it is a matter of days rather then years, but as we lack the wisdom and experience of our forefathers, then only God knows. As long as we have faith in higher power and better future, nothing is ever lost. Everything happens for a good reason. 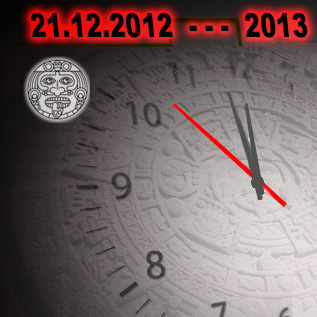 Posted by Nana Baakan Agyiriwah at 2:36 PM No comments: Links to this post